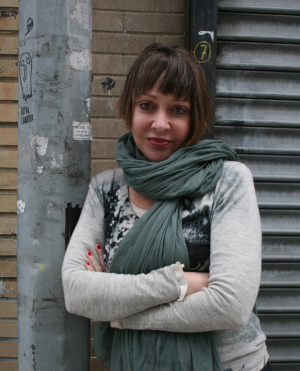 Diana Thater’s work melds human and animal behaviors with visual and technological processes. Her installations speak to a radically altered vision of nature—as both open to multiple subjectivities and completely permeated and mediated by technology and culture. At the same time, Thater’s innovative techniques undermine the typically seamless passivity of video, bringing her into dialogue with artists such as Bruce Nauman, Paul Pfeiffer, and Doug Aitken.

Thater makes videos that are not independent from the mechanisms by which they are shown, from the techniques and machinery by which their footage is shot, or from the architectural space in which they are displayed. In a Thater installation, a viewer is bound up in the action of the camera as it recorded an event in the past and simultaneously as it displays the same event in the present. The result is a visual whirl of changing viewpoints. The viewpoints can be either of animals or of humans, and Thater’s work has been praised as an investigative and open account of subjectivity in a general sense.

Blitz, 2008, presents three famous games of chess, played in succession, on six video monitors. For the project, Thater immersed herself in both chess history and the communities that form around the game. In the video, the viewer sees hands moving the pieces, playing out the prearranged sequences. As with Thater’s other work, the behavioral patterns developed over the course of a game of chess find metaphor in the action of her camerawork. Each screen shows a different point in the chess games; the pattern of action is recognizable but never quite in sync with the patterns around it.

By Diana Thater in the Collection 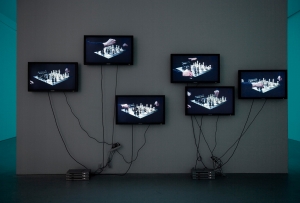