Doug Aitken’s video projects involve the perceptual, narrative, and poetic possibilities opened up by an ever-changing technological global environment. Aitken attempts, in his own words, to register “a twilight of perception where ideas and iconography flicker and reinvent themselves.” By pushing the limits of video, narrative, and three-dimensional display, Aitken explores the essence of cinematography and art. Believing the traditional movie screen to be “too classical” and a remnant of the theater era, Aitken looks to bring the film experience into the modern age. Many of his works from the late 1990s are projected on multiple screens with several images running simultaneously.

New Skin, 2002, is part film and part sculpture. Using complex technological arrangements, Aitken renders the evasive nature of individual perception and memory bound up in a social saturation of images. Projected from four corners of a room onto a pair of suspended, intersecting oval screens, the work is an evolution from Aitken’s earlier styles both physically and conceptually. The film depicts a young woman struggling with the realization that she is losing her vision. She surveys objects and images in her apartment, scanning magazines, books, and photographs in an attempt to archive images before she is blind. Repeating the words, “The more I see, the less I believe in the images I find,” the character becomes aware that her insatiable appetite for all that is new is erasing previous memories.

The young woman roams the interior world of her own mind, a desolate existential void, connecting with the outside only through memory and pictures. At the same time, the viewer wanders the gallery alone, engaged in their own isolated experience. As one walks around the piece, the individual images split, change, and coalesce to the viewer’s vantage point. The editing as well as the physical display of the piece demonstrates Aitken’s ideas regarding the nonlinear quality of memory and perception, the notion that experience is comprised of a series of fractals rather than a neat narrative. According to the artist, “Film…can represent things in a way that is closer to how the mind works.”

By Doug Aitken in the Collection 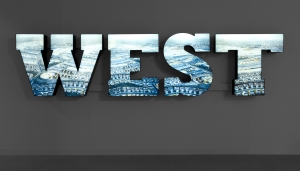 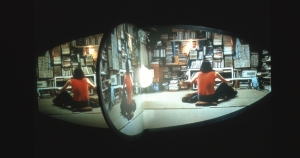 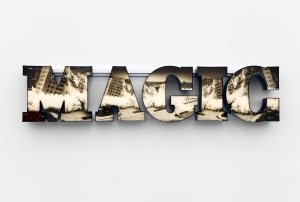 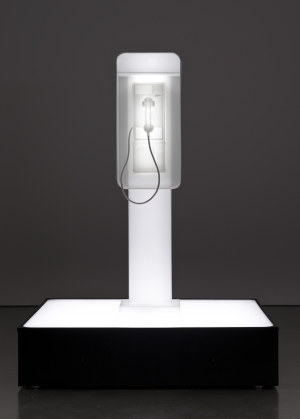