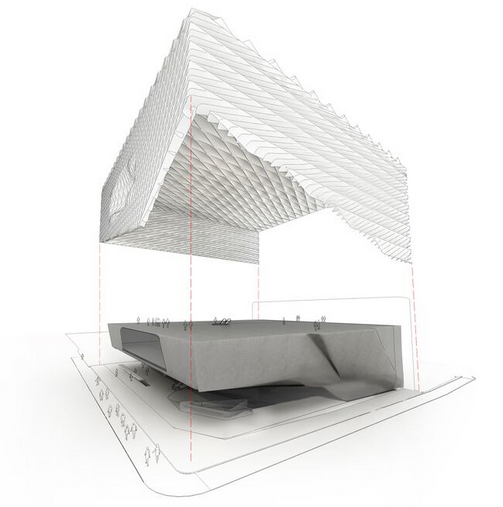 Dubbed “the veil and the vault,” the museum’s design merges the two key components of the building: public exhibition space and collection storage. Rather than relegate the storage to secondary status, the “vault,” plays a key role in shaping the museum experience from entry to exit. Its heavy opaque mass is always in view, hovering midway in the building. Its carved underside shapes the lobby below, while its top surface is the floor plate of the exhibition space. The vault stores the portions of the collection not  on display in the galleries or on loan, but  DS+R provided viewing windows so visitors can get a sense of the intensive depth of the collection and peer right into the storage holding. The vault is enveloped on all sides by the “veil,” an airy, honeycomb-like structure that spans across the block-long gallery and provides filtered natural daylight. 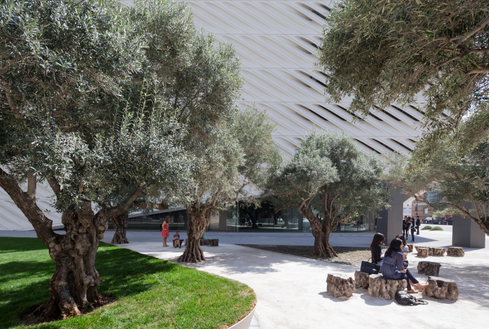 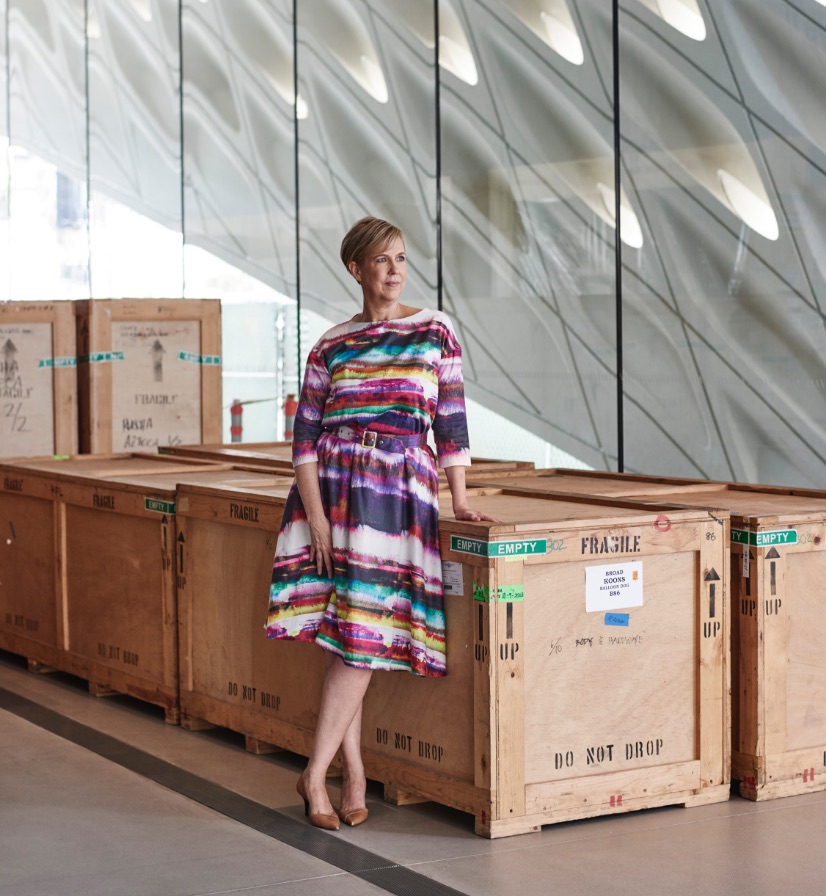 As the director and chief curator of The Broad Art Foundation, Ms. Heyler has grown the foundation’s collection by over 65 percent with the addition of 70 artists, including deep representations of work by crucial postwar figures like Andy Warhol and Joseph Beuys, as well as work by more recent figures like Mark Bradford, Sharon Lockhart, Kara Walker, Jeff Wall, and others. The Broad collection continues to grow by about a work a week under her guidance. Ms. Heyler also oversees the foundation's lending library, expanding the reach of the program to over 8,500 loans to over 500 museums and galleries worldwide since its founding in 1984.

Eli Broad is a renowned business leader who built two Fortune 500 companies from the ground up over a five-decade career in business. He is the founder of both SunAmerica Inc. and KB Home (formerly Kaufman and Broad Home Corporation).

Through the foundations, the Broads have created groundbreaking independent institutions in each of their three areas of grantmaking, including The Broad Center, which develops leaders to help transform America’s urban public schools; The Broad Institute, a global leader in genomics; and The Broad, which was founded in 2015 as a gift to the city of Los Angeles and is dedicated to making contemporary art accessible to the widest possible audience.

Mr. Broad was the founding chairman and is a life trustee of The Museum of Contemporary Art in Los Angeles, to which The Broad Foundation gave a $30 million challenge grant in December 2008 to rebuild the museum’s endowment and to provide exhibition support. He is a life trustee of The Museum of Modern Art in New York and of the Los Angeles County Museum of Art, where the Broads made a $60 million gift to build the Renzo Piano-designed Broad Contemporary Art Museum, which opened in February 2008, and to fund an art acquisition budget.

Tireless advocates of Los Angeles, the Broads have championed the cultural and architectural vitality of the city. Committed to the belief that all great cities need a vibrant center, Mr. Broad was the visionary behind the development of Grand Avenue, which will blend residential, retail, cultural and recreational uses into a civic centerpiece to rival the main boulevards of the world’s greatest cities. In 1996, Mr. Broad and then-Mayor Richard Riordan spearheaded the fundraising campaign to build the Frank Gehry-designed Walt Disney Concert Hall, which opened to worldwide acclaim in October 2003. The Broads provided the lead gift to the Los Angeles Opera to create a new production of Richard Wagner’s four-opera cycle Der Ring des Nibelungen in 2009-2010. They gave $10 million in 2008 to create an endowment for programming and arts education at The Eli and Edythe Broad Stage and The Edye Second Space at the Santa Monica College performing arts center.

From 2004 to 2009, Mr. Broad served as a Regent of the Smithsonian Institution by appointment of the U.S. Congress and the President. He is a Fellow of the American Academy of Arts and Sciences and in 1994 was named Chevalier in the National Order of the Legion of Honor by the Republic of France. Mr. Broad serves on the board of the Future Generation Art Prize. He received the Carnegie Medal of Philanthropy in 2007 and the David Rockefeller Award from the Museum of Modern Art in March 2009. Strong believers in higher education, the Broads have further extended their philanthropy in the arts. The Broad Foundation made a major contribution to the School of the Arts and Architecture at UCLA for The Eli and Edythe Broad Art Center, designed by Richard Meier. In 1991, the Broads endowed The Eli Broad College of Business and The Eli Broad Graduate School of Management at Michigan State University (MSU), where Mr. Broad graduated cum laude in 1954. In June 2007, the Broads announced a $26 million gift to create the Eli and Edythe Broad Art Museum at MSU, and they gave another $2 million to the project in January 2010. The Zaha Hadid-designed museum opened in November 2012.

Mr. Broad's first book, The Art of Being Unreasonable: Lessons in Unconventional Thinking, was published by Wiley in May 2012 and is a New York Times, Wall Street Journal, USA Today, and Washington Post bestseller.

The Broads reside in Los Angeles and have two grown sons. 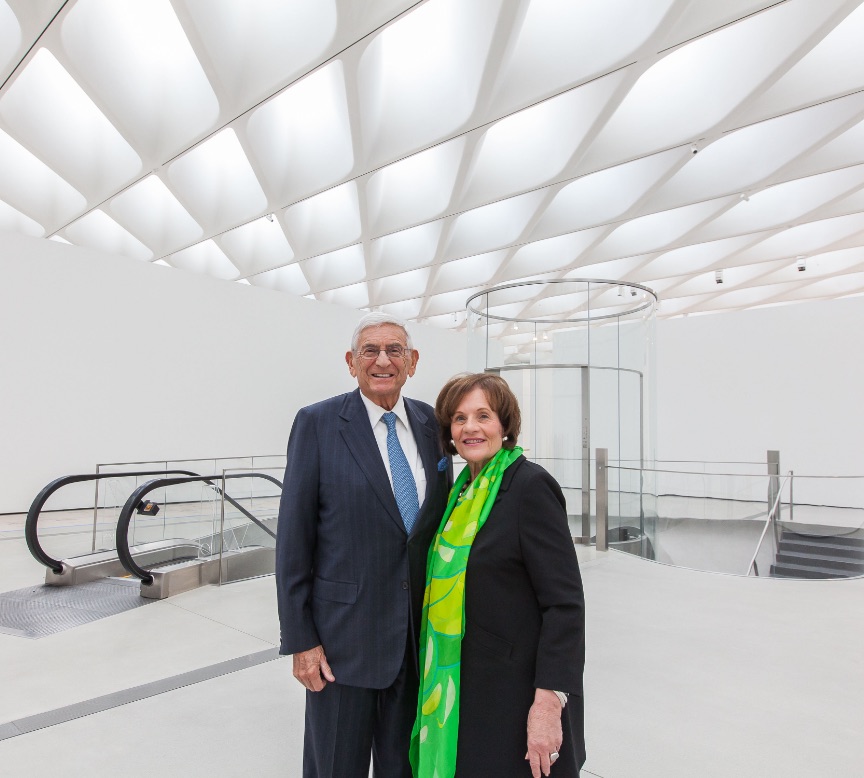 Eli and Edythe Broad have been building their collection of postwar and contemporary art over the last 50 years. With a belief that the greatest art collections are built when the art is being made, the Broads took to collecting art of their own time. 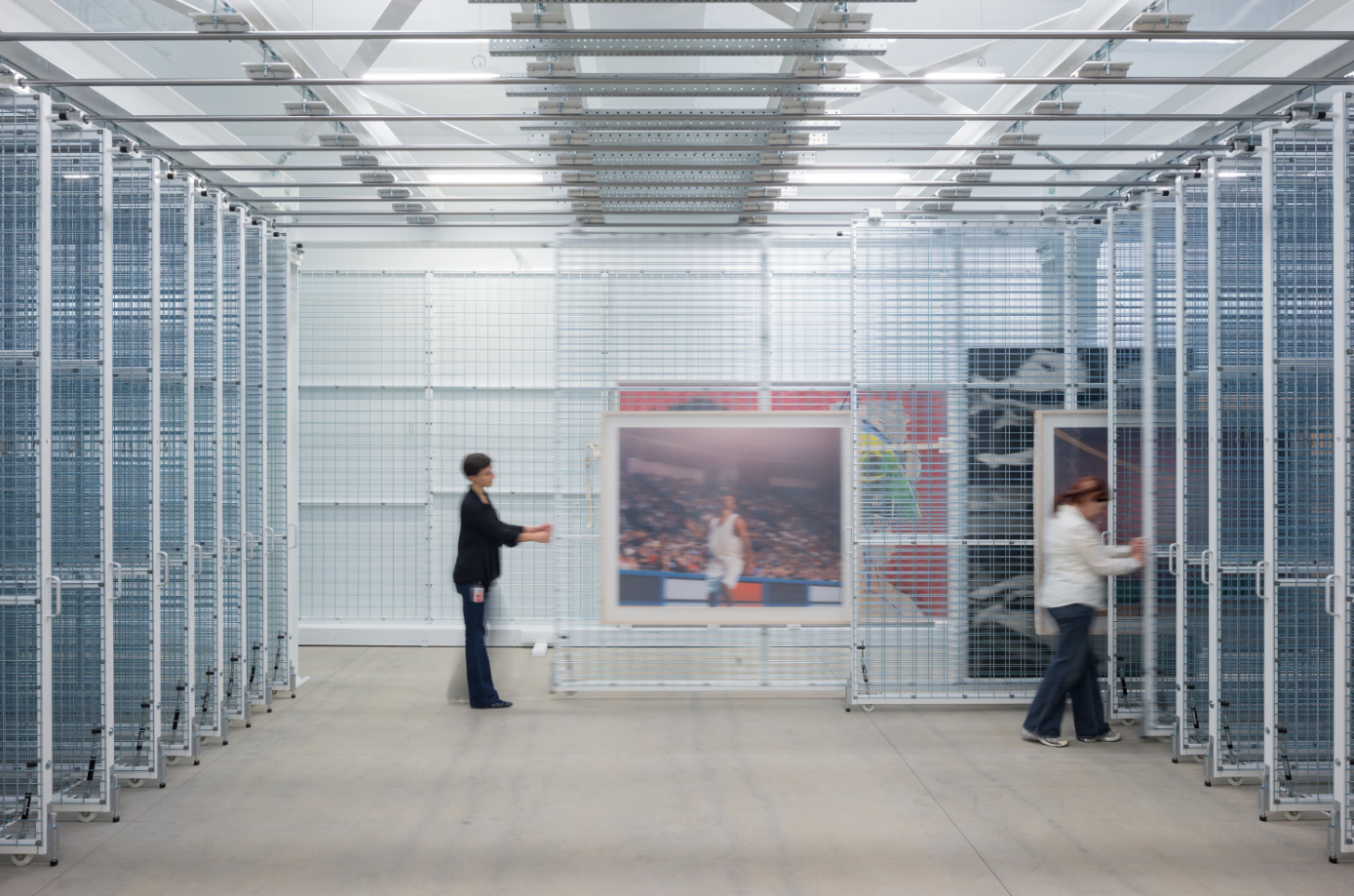 03/20/2019
The Broad Presents Landmark Exhibition, Soul of a Nation: Art in the Age of Black Power 1963-1983 and Announces Related Exhibition Programming