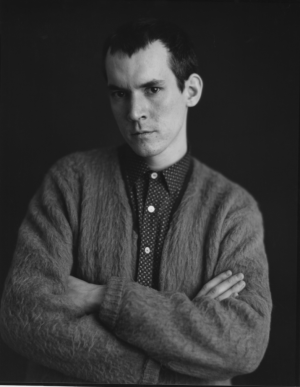 Philip Taaffe uses found abstraction as satire and comments on theories of abstraction. His densely layered images, however, are not reducible to mere responses to established programs of art. As many have observed, Taaffe’s practice, through the reinvention and reworking of the history of art, not only has critical depth, but also a power to entrance. The paintings have heavily worked, studiously unpolished surfaces and the ability to conjure historical resonance without feeling contrived.

Taaffe has traveled widely, constantly collecting and building a catalog of images that inform his work. While his paintings are packed with references to artists like Barnett Newman, Bridget Riley, and Hans Arp, they are also full of visuals from Roman mosaics, Byzantine altarpieces, Islamic mosque tiles and turrets, botany textbooks, and countless other sources. Taaffe maintains close control over this democracy of images, inventing techniques to increase their visual power. Screen with Double Lambrequin, 1989, is a great example, heralded by critic Robert Rosenblum as having the ability to “fuse the serious, exalted languages of geometric abstraction with the organic shapes of natural history, transforming this odd hybrid into a vehicle of decorative pleasure.”

California King Snake (Ringed Phase), 1997, features both the playful and critical concerns with abstraction that won Taaffe acclaim in the 1980s and his expanding vocabulary of images, pulled from eclectic and diverse sources. The baseline for the work is Jackson Pollock’s famous all-over drip paintings from the late 1940s. Taaffe presents Pollock’s skeins and looping marks as elaborately rendered twisting snakes. He uses the abstract and decorative patterns of snakeskins found in nature both as an homage to Pollock’s legacy and as an ongoing affirmation of painting’s continued relevancy.

By Philip Taaffe in the Collection 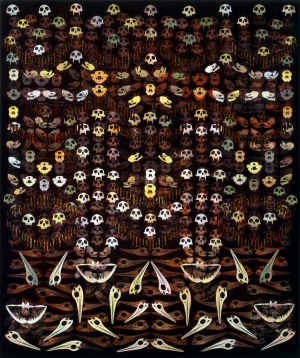 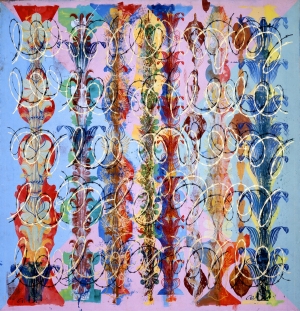 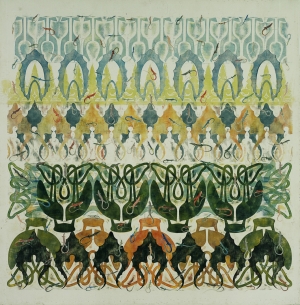 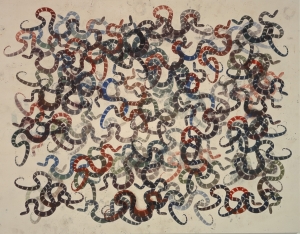