Jenny Holzer emerged in the late 1970s and early 80s with the intention of taking art out of the museum and gallery context and making it more accessible to the general public. Her strategy was to use text printed on billboards, park benches (as in It takes a while before you, 1989, from the Living Series), and commercially printed items like T-shirts and posters to disseminate her work throughout New York City. Truisms, her most well-known works, first appeared in 1977, and were inspired by readings at the Whitney Independent Study Program, which then focused on structuralist and post-structuralist theories of language. At a time when the media of mass reproduction—like television and the photograph—brought key, centuries-old understandings of art into question, Holzer’s Truisms presented an art beyond representation and authorship.

Critics often see Holzer’s practice as stemming from two intertwined trajectories in art history. First, a direct precedent is the work of Joseph Kosuth, whose art is driven by philosophy and the texts that inform it. Holzer’s emphasis on text rather than objects marked a watershed in conceptual art. The other inspiration is feminism and an increased awareness of text and voice as tools of patrimonial control. Holzer’s neutral, disembodied writings are praised as language situated in culture rather than employed as means of expression and possession. In a seminal moment in 1982, sponsored by the New York Public Art Fund, Holzer posted on the large Spectacolor electric signboard in Times Square.

In the installation Under a Rock, 1986, Holzer began using more expansive media to disseminate her texts. Described by the artist as “a combination of a church, a space station, a Greyhound bus stop, and a high school auditorium,” the work features ten granite benches and three LED signs. It also presents a shift in the neutral voice in Holzer’s work. Addressing themes of sex and violence, the words broadcast by the LED signs are passionate and outspoken, calling attention to how power can lead to horrifying acts of violence and exploitation.

By Jenny Holzer in the Collection 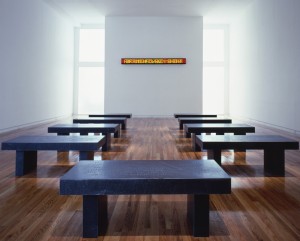 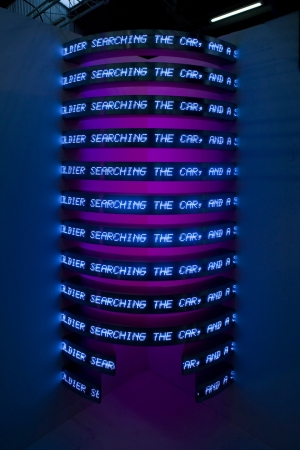 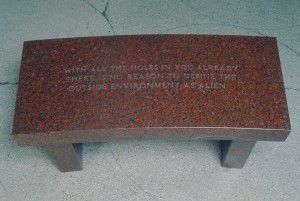 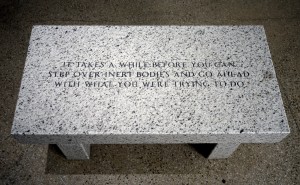 Jenny Holzer, 1989
The Living Series: It takes a while before you 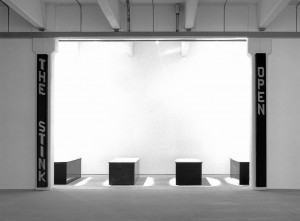 Jenny Holzer, 1989
Laments: I was sick from acting normal... 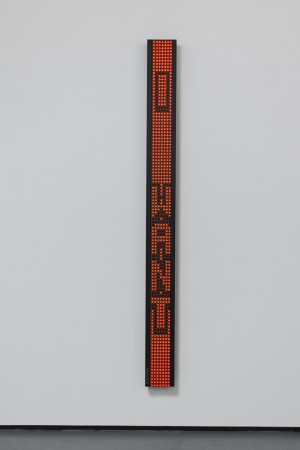 Jenny Holzer, 1987
Laments: I do not want to be human...
Browse the collection