A driving force behind Catherine Opie’s work is the evolving and amorphous nature of the United States. She examines how the shaping of the American story includes and excludes certain groups of people. Opie took the seven photographs that make up monument/monumental during a road trip from Los Angeles to Richmond, Virginia, where Black Lives Matter demonstrators had reclaimed a Confederate statue of Robert E. Lee as a site of protest for racial justice. On the journey, Opie took photographs of the American landscape, and through blurring the images, placed distance and reflection at the heart of each scene. “In the first and last image, you’re looking at the exact same sunset,” Opie wrote. “In this piece, there is this suspended sun that never quite sets on the history of racism in this country. It is very much about what I was thinking about as I was traveling.” In September 2021, the statue was removed.

By Catherine Opie in the Collection 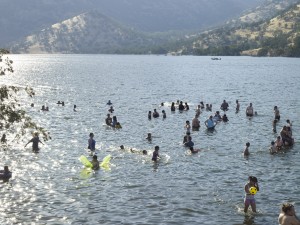