Dynasty Handbag and Ed Patuto Discuss I Hate This Place

Ed Patuto, Director of Audience Engagement at The Broad, speaks with performance artist Jibz Cameron, AKA Dynasty Handbag, about her new video work commissioned by The Broad entitled I Hate This Place. It was inspired by Mike Kelley’s Extracurricular Activity Projective Reconstructions #10, 21, 24 (Gym Interior), which is part of Kelley’s monumental performance, installation, and video work Day is Done. Extracurricular Activity Projective Reconstructions #10, 21, 24 (Gym Interior) is one of the fifteen works by Kelley in the Broad collection.

Comedy and childhood trauma are key elements of both your work and Mike Kelley’s work, including Day is Done and Gym Interior. Could you talk about the interplay between the two—comedy and tragedy—in I Hate This Place?

I subscribe to the comedy is tragedy plus time adage. When I’m able to process things and communicate them after the fact, they come out funny. I don’t know why that is. It’s just what happens for me. I’ve always really liked comedy. I mean, who doesn’t like comedy? I thought that I would be on Saturday Night Live or I would be an improv comic or something similar, that that’s what my career would be. But I might have been a little bit too weird; it didn’t really stick.

How does it relate to childhood trauma?

In my family of origin, we were a jokester family. There was a lot of crazy shit going on all the time and nobody ever talked about it, but it was okay to make jokes about it. Even now, my brother, sisters, and I, we will talk about really grim stuff and it always turns into a joke. That’s just the way I think we were able to manage it. There was a lot of trauma and nobody was really running the show. There were no adults present. That’s one way I learned how to cope and how to operate in the world. My reaction to things that scare me, or things that I feel are scary and sad, is to process them through comedy.

In terms of the video, it came from these memories I have of junior high school. When I retell the stories, they’re really funny—like the one about my bully or my math teacher, who was just this horrible prick who hated me and would make me and my best friend do all these ridiculous extra exercises because we were such bad kids, blah, blah, blah. At that time, I was also experiencing some really crazy stuff with my home life, and I was starting to act out—drinking and acting out sexually. It’s really funny describing my bully. Everybody laughs, but I was so terrified of her. I mean, terror. You can’t even describe that feeling as a kid, when you feel like you’re going to die. I really wasn’t going to die from my bully, but I could have died from other things that were actually happening. I think that’s where I find the humor in it, in playing with these extremes and scale. 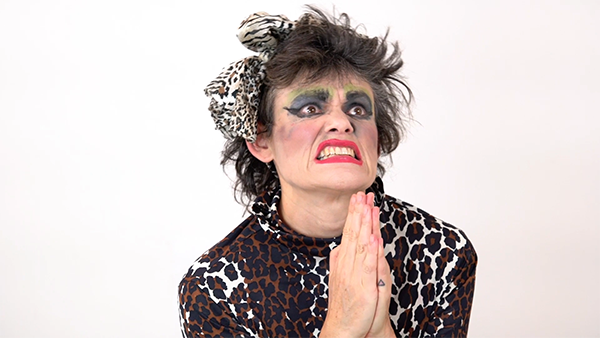 In terms of my own experience, I hated school. I just absolutely hated it. I just hated it. I didn’t finish high school. Pretty early on, I grew up with a real mistrust of adults and any kind of governance. Partly it was because my parents were kind of wild, but also they were always talking about the government. I was really mistrustful of any system that tried to tell me to do anything. I still have that a little bit, so don’t you try anything! In my experience, the institutional world has a lot less humor and self-reflection than I thought. For example, when I first started teaching in colleges, I was always cracking jokes about being a professor and how funny it was. Everyone was like, “What?” I thought, but isn’t this funny? This is like this thing that’s made up that we’re doing. It’s a play, right? We’re all in this play together. Aren’t we all in on the joke? But no, we’re not all in on the joke.

How was it for you making I Hate This Place, which very much addresses these issues, especially the educational complex? You talk quite specifically about your math teacher and the bully in school. In the working of that piece, how were you thinking about those kinds of repressed memories?

Well, when you asked me about doing a piece in response to those works of Mike Kelley’s, for me, I’m responding to how they make me feel about that time period—even though I’m not going to say that I know what Mike’s work is about. It’s whatever I feel reminded of or how I respond emotionally. At the time that we talked about it, I was reading this book called The Age of Opportunity, which my trauma therapist told me to read. It’s about the age of twelve or so, when young adults really need this particular guidance because it’s when they start to fragment a little. Young women can become sexualized at that age and then become thought of as adults before they’re ready to be thought of as adults. I started thinking about my own experience with that, which was certainly true for me. Then I started thinking about Shelley Holmes, my bully, and that was absolutely true for her because she was totally sexualized. One of the things that got talked about all the time was how she was such a slut and had these giant boobs, but she was in the seventh grade. She was a child and I was a child.

I was thinking about in what way I was asked to have more responsibility or to make these emotional decisions, such as my body is saying I’m ready for sex. I’m not ready for sex at all in my brain, but all these men are coming at me like, “You’re ready,” and I’m like, “Oh, I’m an adult now. I’m ready.” Then, we’re asked to make these decisions that we’re not ready to make. It leads to trauma, and also a loss of—I don’t want to say innocence, but there’s a gap there of maturity and growth that never got to happen. I was thinking about that experience with myself and then having compassion for all these people that I knew had the same kind of thing happen, and that it was just going on and it was so obvious in these institutions, like in my junior high school and my high school, and that it’s very violent and awful.

I also kept thinking about punishment and detention and cultural institutional repression. Even with what’s going on currently with defund the police and the school-to-prison pipeline. It’s like this is not the way to deal with people who have needs—emotional and mental needs, let alone all kinds of other needs. It’s a very punitive system.

Day is Done is a musical. Mike Kelley wrote the music and script, and he directed it. Jibz, you wrote the script and directed I Hate This Place. And in the end of the video, it’s about creating a musical performance. Music is important to you and often when we hear music, it conjures childhood memories. Can you address how you deploy music as a creative element?

I was always obsessed with the radio when I was a kid. I would record the radio overnight, so that I could listen the next day. And I would record my own radio as though I were the radio host—"And now, we’re going to hear Duran Duran,” and I would play it. I don’t know. I would cut school and listen to the radio, and I would win all these radio contests all the time. I just wanted to be part of the larger communication of music and radio. That might have been part of my attraction to media—getting in people’s heads and providing a real escape. It’s probably the biggest thing that influences me. I have to listen to music every day—and loud! I think it might be my favorite thing. I’m not any good at playing it, but I like sounds and noises, so that’s where the music came from. In that video, I was just thinking about the ways that children and adults adapt to their situations that they’re in, and the whole idea of making something out of nothing. I draw all the instruments and then pretend to play them—pretend and play is so important as a kid, and we lose sight of that. Then, we have to go to therapy and learn how to have fun again. Because we’re old and we’re like, “Oh, I took myself to the beach. It was amazing,” but you have to unlearn things to get back to that place. 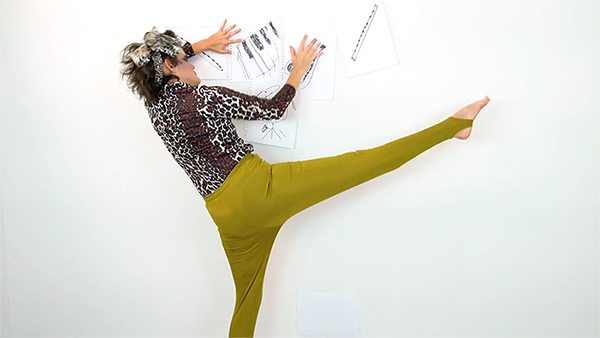 How has Mike Kelley influenced you?

I’m an enormous fan of Mike’s work. I’m so honored to even be in a conversation about him. What a huge influence he is on my work. Someone I know told me that we need art. She said that we need it to help us move through our feelings and to understand things. It’s another language. Our ability to communicate feelings and thoughts and experiences is really limited in terms of what we have as a common language and we need art to not feel so alone. Then, there’s that idea of the genius alone in their studio doing nothing else and that plagues me. That’s not how I work at all. Not to compare and despair around Mike Kelley, that would be pointless. But yeah, he has given me so much, and joy, so much joy. James Spooner, director of the documentary film Afro-Punk, on punk and no wave. Terrace Martin, in conjunction with Quincy Jones Productions, on jazz and bebop. A conversation on the architecture of the museum and Clarissa Tossin's film Light and Space.