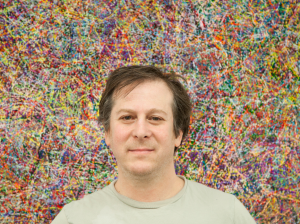 Tom Friedman is known as much for his economical, highly focused installations as he is for the unconventional, offbeat personalities of his works. While Friedman evokes a lineage of witty conceptualism and electric pop imagery, his presentation recalls the spare, phenomenologically engaging world of minimalism. Similar to artists such as Charles Ray and Robert Therrien, Friedman is deeply invested in the history of sculpture and displays his knowledge with a sense of humor and a light touch.

Often Friedman’s works are structured around the idea of growth and that something simple can spiral or burst into intricate patterns and overwhelming moments of accumulation. He uses humble, everyday materials, from cereal boxes and bubble gum to packaging bubbles, foam particles, and even dust. These materials are placed in seemingly infinite arrangements, recalling elaborate informational systems and fractals while at the same time maintaining an obsessive, human psychological import.

Zombie, 2008, and Care Package (Manipulated), 2008, exemplify Friedman’s world. Care Package (Manipulated) is a box made up of altered wrappings of cookies, cereal, candy, and countless other products that the artist uses in his daily life. Zombie is a decomposing human figure, losing its insides as it walks along and crashes into the wall. Both sculptures reorient and reinvent ordinary materials. Like with most Friedman sculptures, extended viewing reveals the obsessive labor involved in creating the apparently airy work.

By Tom Friedman in the Collection 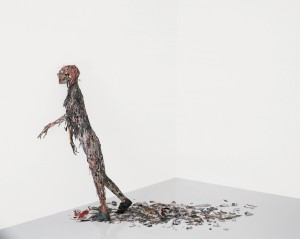 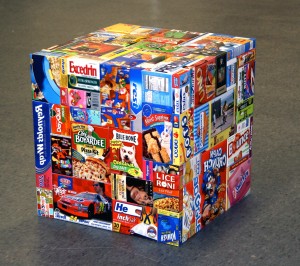