Toba Khedoori renders small pictorial scenes on large expanses of paper. Instead of using scale to tempt viewers into an illusionary environment, as in historic landscape painting, Khedoori dwarfs her imagery to call attention to the literal, blank space of paper around it. Furthermore, Khedoori’s surfaces retain the incidents of their physical making, including studio debris like cat hair and dirt as well as the artist’s own footprints.

The subjects of her paintings are instantly recognizable—park benches, rocks, fences, tunnels, houses, explosions—but the ordinary is altered, not only due to distortions of perspectival rules but also because context has been eliminated. While the painted subjects are isolated in space, full of an allusive but present narrative potential, the tactility of the surface keeps the viewer aware of the artwork as a physical, handmade object. The works seem like metaphors for social dystopia or personal loss, but the sources for comparison are ambiguous. For this reason, critics refer to Khedoori’s work as a presentation of apparently psychically charged objects separated from their environments, much in the same way a place where a crime or special event has occurred is separated from the everyday objects of its surroundings.

In works such as Untitled (Black Fireplace), 2006, Khedoori has heightened the spatial experience of her paintings with more intense color. Here, a fireplace, a traditional symbol of hearth and home, sits small and adrift in the darkness. The black surface is rendered in swatches of encaustic, approximating the size of bricks. Instead of providing comfort and nostalgic reflection, Khedoori’s fireplace keeps the viewer at a distance; it does not function like a hearth but as simply an image on an expanse of paper.

By Toba Khedoori in the Collection 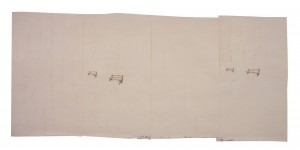 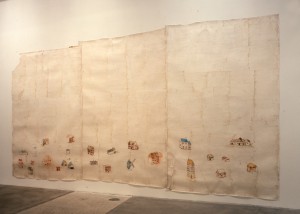 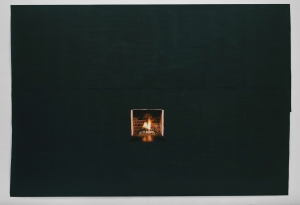