Thomas Struth must see the world like a surgeon sees the flesh of her next patient: as a translucent veil or soft container, the content of which reveals itself through the beholder’s coolheaded study and exacting touch. Since the late 1970s—having switched his medium from painting to photography—Struth has been making pictures that are both ordinary and grand in the rituals they reveal about humanity and its relationship to the physical world. Whether photographing portraits, landscapes, architecture, or an interior scene, Struth homes in on something omnipresent but fleetingly visible: a rhythm, a geometry—the warp and weft of our social fabric—that can be startlingly sublime when frozen in a still image.

A student of Gerhard Richter and Bernd and Hilla Becher at the Kunstakademie Düsseldorf, Struth blends Richter’s stark drama and the Bechers’s indexical methodology. After two series called Museum Photographs 1 and 2, in which Struth photographed people looking at art—showing the viewers in various states of interest, the museum’s iconic architecture, and the art itself—he grew curious about seeing the museum from an artwork’s perspective. In his series Audience, 2004, he mounted his camera at the base of one of the most famous and celebrated sculptures in the world, Michelangelo’s David at the Galleria dell’Accademia in Florence. What are people thinking and doing in the face of this zenith of cultural consumption? Some are entranced; some are fatigued, distracted, bored; some mimic David’s classical contrapposto pose. They all, however, anticipate something significant—intellectually or spiritually—by participating in the act of viewing this work.

Struth has intervened in what is typically a one-way perspective from the art consumer to the art object. He returns the gaze of the viewer by positioning the camera’s point of view from the inanimate art object looking out. The result is an imaginary exchange in which the viewer takes on the perspective of the object itself, art consumer as voyeur of other art consumers. Emphasizing the social dynamics at work in these temples to artistic achievement, Struth suggests that the treasures we flock to see may have a physical impact that extends beyond consumption and into a social direction.

By Thomas Struth in the Collection 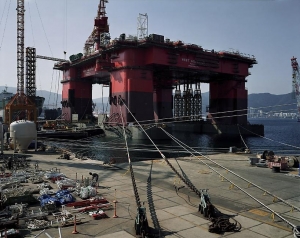 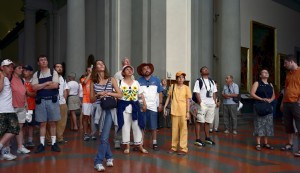 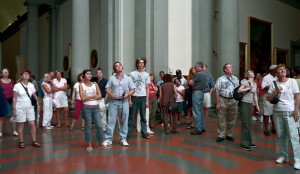 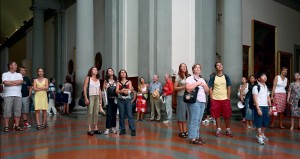 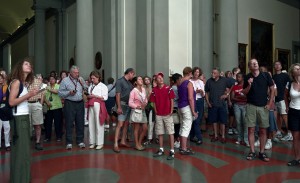 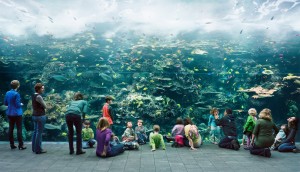 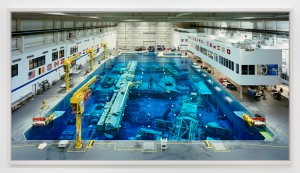