Special Exhibition
Takashi Murakami: Stepping on the Tail of a Rainbow
Get Tickets

Takashi Murakami is one of the most widely recognized artists working today. His body of work traverses fine art, fashion, animation, film, and other commercial art.

Murakami’s expansive artistic universe will be on view in Takashi Murakami: Stepping on the Tail of a Rainbow, the artist’s first solo exhibition at The Broad.

The exhibition, which includes all of Murakami’s works in the Broad collection and key loans, features 18 works created throughout his career and new immersive environments developed in tandem with the artist and his studio, Kaikai Kiki Co., Ltd.

Among the works presented are two of the artist’s monumental paintings, the 32-foot-wide 100 Arhats (2013) and the 82-foot-wide In the Land of the Dead, Stepping on the Tail of a Rainbow (2014), and the 1999 sculpture DOB in the Strange Forest (Blue DOB) that features Murakami’s iconic anime-inspired character Mr. DOB.

Image credit (top): Takashi Murakami, In the Land of the Dead, Stepping on the Tail of a Rainbow (detail), 2014. Acrylic on canvas. The Broad Art Foundation. © 2014 Takashi Murakami／Kaikai Kiki Co., Ltd. All Rights Reserved

FREE TAKASHI MURAKAMI: STEPPING ON THE TAIL OF A RAINBOW OPPORTUNITIES

Receive free access to Takashi Murakami: Stepping on the Tail of a Rainbow every Thursday evening from 5 p.m. to 8 p.m. and all day during operating hours on July 5 in honor of the Independence Day holiday. Reserve free advance tickets.

Timed tickets will be released on Friday, April 15, at 10 a.m. PT at ticketing.thebroad.org.

Tickets include same-day access to the special exhibition This Is Not America's Flag and same-day general admission to The Broad’s third floor galleries, which feature a frequently changing selection of works from the Broad collection.

For Takashi Murakami, the explosive interest in the metaverse and in virtual and augmented realities (AR) constitutes a societal and cultural sea change. Developed as part of the special exhibition with the artist, in partnership with Spark AR, Instagram, and BUCK, Murakami uses AR experiences to connect his paintings and sculptures with these emergent realities and technologies.

Inside and outside of The Broad, experience AR features that exist on top of and in relation to the physical world. Through the Instagram app, Murakami characters step out of their physical forms and into a ghostly digital existence, harbingers of what is yet to come for Murakami’s work and thinking (update your Instagram app to the latest version to use). 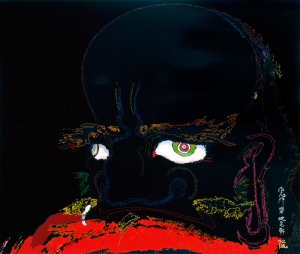 My arms and legs rot off and though my blood rushes forth, the tranquility of my heart shall be prized above all. (Red blood, black blood, blood that is not blood)
Takashi Murakami
2007
acrylic and platinum leaf on canvas mounted on board, signage in platinum and gold leaf
71 x 84 x 2 in. (180.34 x 213.36 x 5.08 cm) 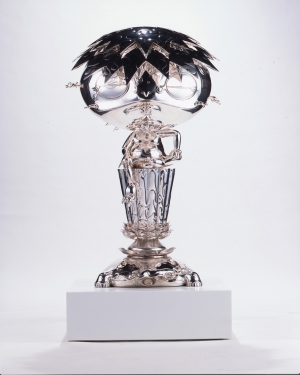 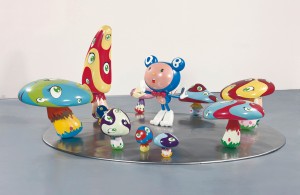 “TIMES: AMERICA TOO”
Takashi Murakami & Virgil Abloh
2018
Acrylic on canvas mounted to board

100 Arhats
Takashi Murakami
2013
Acrylic, gold and platinum leaf on canvas mounted on board