After a successful career making models for film, television, and advertising (most notably in Jim Henson’s Creature Shop), Ron Mueck made the transition to fine art, creating realistic sculptures using scale and narrative suggestion for the utmost humanistic and empathetic impact. Mueck received great acclaim and press attention with his early work Dead Dad, 1996–97, which debuted at the infamous 1997 Sensation exhibition at the Royal Academy of Arts in London.

As some critics have noted, practitioners of realist sculpture often draw their power not from faithful reconstructions of reality but from subtle exaggerations or alterations of the known world. Mueck’s manipulations of sculptural scale are often dramatic, and his figures are either writ large or reduced drastically to strengthen the metaphor between the artist’s material presentation of a personality and the psychic life the viewer imagines for the figure. Viewers ultimately find themselves in intimate moments where their own personalities and experiences align themselves to his sculpture.

Crouching Boy in Mirror, 1999–2002, creates a complex experience in the human life cycle, that of the awkward adolescent. Much smaller than life sized, a boy dips to see his reflection in the mirror. With the mirror, the piece activates an exchange of glances. We see the brooding boy seeing himself. He may see our reflection in the mirror next to his. Perhaps we are the reflection by which he judges his own. Perhaps we create his reflection. Ultimately, the viewer feels complicit in whatever anxiety produces the look of self-doubt in the boy’s expression.

By Ron Mueck in the Collection 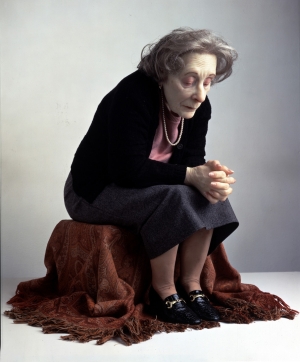 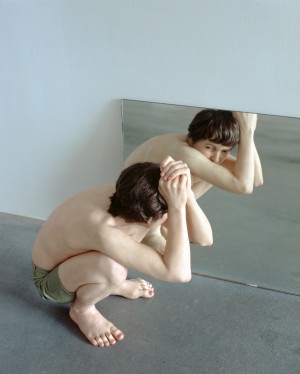