Robert Longo’s works are typically brash and eye catching. He marries the power of photographic and filmic images with large-scale artworks that often escape categorization as strictly painting, sculpture, or media art. As the artist states, “My work exists somewhere between movies and monuments.” Longo explores the importance of images in popular culture and the stereotypical portrayals of the individual’s alienation within a complex society. His aesthetic and conceptual approach came to symbolize the changing landscape of 1980s New York City—with its rapid gentrification, vibrant nightlife, and ascendant stock market.

Longo’s images depict violent physicality and psychological angst motivated by an undefined source left to the viewer’s speculation. His most famous series, Men in the Cities, consists of large charcoal and graphite drawings of well-dressed men and women between moments of confinement and release. These works have become metaphors for the success and money-driven “yuppie culture” of the 1980s. Untitled (Men in the Cities: Ellen), 1981, shows a young woman in such a moment of ambiguity, with a full and purposeful gesture yet unmoored to any definition beyond her stylish heels, proper blouse, and designer skirt.

Longo’s drawings gradually became larger and more ambitious and included many types of media, such as his cast aluminum relief sculptures. In Tongue to the Heart, 1984, a central lead-panel relief features an imposing, empty corridor. To its left a slightly smaller-than-life-size sculptural figure clamps his hands to his ears as if experiencing agony; to its right eyes in a large, red, mask shape stare out and up, floating disembodied on a black ground; and below yellow waves crash. Here, Longo presents a psychological scene of imprisonment and anxiety that hints at an unattainable, constantly threatened transcendence. 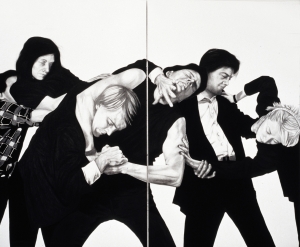 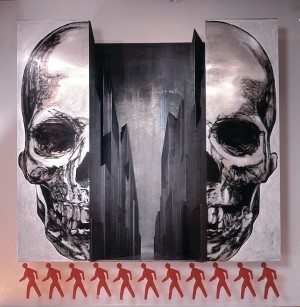 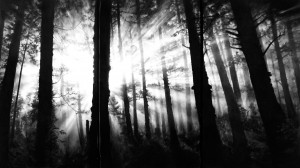 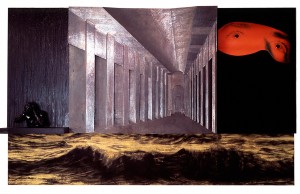 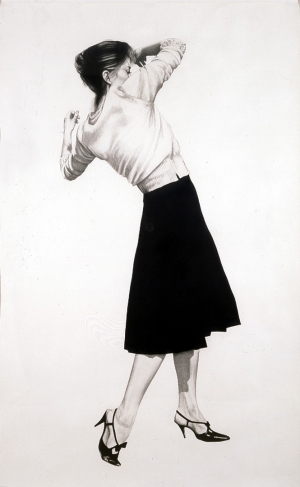 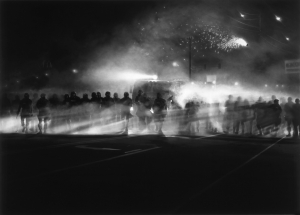 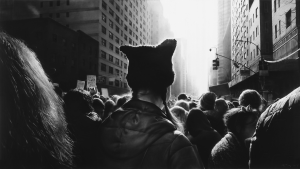 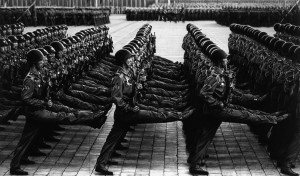