Robert Irwin’s paintings, installations, and site-specific sculptures generate what he calls “phenomenal presence.” Instead of functioning according to an image or representation, Irwin’s works foster experiences that viewers discover individually through self-guided interaction with the art. Decades of acetic experimentation at one point led Irwin to abandon studio-made art altogether and to focus his ideas specifically on public sites. Irwin, as well as other artists working in this phenomenological mode, such as Richard Serra and James Turrell, continues to have a huge impact on younger artists and on the direction of art history.

Irwin began his career as a painter. Initially he worked within an abstract expressionist style but quickly moved on to a more reductive approach to painting, specifically the elimination of everything in a work that distracted from its overall visual impact. After a series of what are known as his “line paintings,” Irwin pushed his reductions as far as he could go within a traditional canvas with works like Untitled, ca. 1964–66. Informally called one of Irwin’s dot paintings, Untitled is a field of subtle gradations of color, made up of thousands of small dots, which disperse the scope of vision. The work successfully takes the visual experience beyond traditional painting composition and into a negotiation with optics itself. The virtual impossibility of reproducing this painting is one indication of the work’s radical departure from the prevailing abstract expressionist sensibility at the time.

Disc, 1967–68, is another critical work for Irwin. A few years before making this piece, Irwin began to focus on the optical and experiential qualities of what were then considered non-art materials, including industrial glass, plastics, screens, and cloth sheathing. To develop Disc, Irwin collaborated with a metal shop in Los Angeles to study the properties of concave and convex discs. Irwin painstakingly worked on the surface texture of the piece, fusing sprayed color with the natural properties of light. The discs create an otherworldly effect, hovering quietly in the space while almost completely dissolving into the natural light of their surroundings.

By Robert Irwin in the Collection 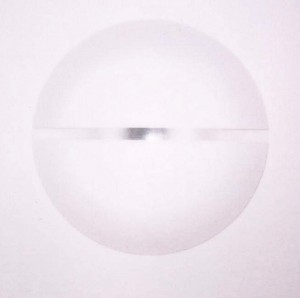 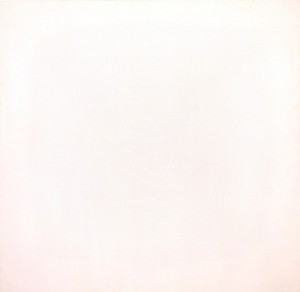