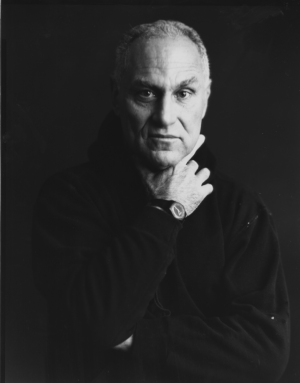 Richard Serra is arguably the most important sculptor to emerge in the later half of the twentieth century. Serra studied painting at Yale in the early 1960s, and by 1966 he began his innovative sculptures using industrial materials like vulcanized rubber, lead, and steel. Relying on literal qualities of matter for meaning (rather than metaphor or allegory), Serra’s practice focused on the weight and nature of materials. The early work is often seen in dialogue with developments in painting in the 1950s, especially the work of Jackson Pollock and the theories of Clement Greenberg. Some critics have maintained that Serra, along with artists like Donald Judd, Sol LeWitt, and Dan Flavin, revolutionized sculptural thinking.

Unlike a traditional sculpture, in which a figure- or event-based image is brought to life in a three-dimensional object, Serra’s sculptures form environments. They are walked around, into, and through. In 1970, Serra was inspired by his travels to Japan’s many Zen gardens. The objects, rocks and other natural elements, in the gardens are read in relation to the space around them rather than as autonomous components. Some critics claim that Serra’s sculptures, very much in the spirit of the Zen gardens, are phenomenological in that they unify human rationality and intellection into moments of lived experience. Others note that Serra’s sculptures break up patterns of experience, registering like a break from the lived world. In this mode of thinking, Serra’s work is antiphenomenological.

No Problem, 1995, was commissioned by Eli and Edythe Broad and installed at their Oakmont residence in Los Angeles, California. The work consists of four conical-shaped weatherproof steel plates set in a twisting relationship to each other and the lawn around them. Fifteen feet high and weighing a combined sixty tons, the plates of steel reorient viewers as they walk around and through them, transforming the extravagant weight into a system of experiential balances. As philosopher John Rajchman writes, “Into our movements in space Serra’s works induce trajectories that cannot be centered in the usual relations of subjectivity and objectivity, inside and outside—that try to defeat space’s habitual coordinates (up, down, right, left, high, low), unmooring us from our usual sense of orientation, of ‘being there.’”

By Richard Serra in the Collection 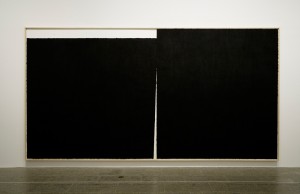 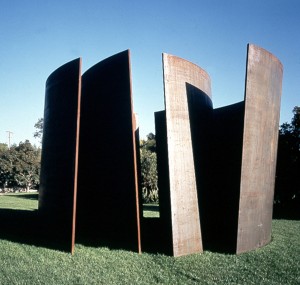