In the late 1940s and early 50s, Richard Diebenkorn emerged as one of the few successful abstract painters in the United States outside of New York City. Living in Berkeley, California, he developed a unique and respected form of abstract expressionism at a time when the style was gaining ascendancy. In 1955, he unexpectedly switched back to representational painting, a style for which, like his abstract expressionist work, he would eventually gain recognition.

This representational style would interest Diebenkorn until 1966, when he moved to Santa Monica, California. There, he would begin the famous Ocean Park series, which edified his status as a major artist. The works are not strictly abstract or representational but are usually seen as trafficking between the two concepts. On one hand, a viewer can sense the light, color, and even organization of the Santa Monica environment in which Diebenkorn painted the series. On the other hand, the sensations remain abstract and never directly reference a particular landscape.

A monumental painting more than eight feet high, Ocean Park #90, 1976, exemplifies Diebenkorn’s highly recognized work. The painting deftly employs many of the features of the series, large washes of pale color interspersed with angular splits—sometimes considered light through a window, sometimes beach architecture, and sometimes streets. Ocean Park #90, however, is slightly more somber than many other works in the series, pushing blue into a slate gray and daylight into a palette found during a sunset of red and yellow, an evening light.

By Richard Diebenkorn in the Collection 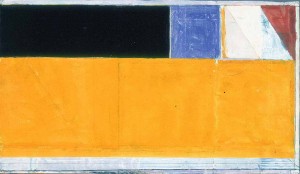 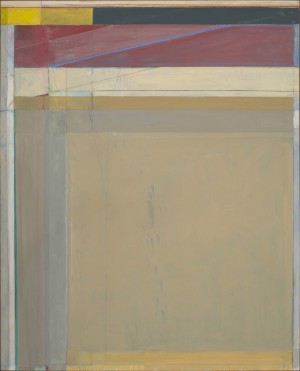