Ray Smith’s paintings incorporate surrealistic and animistic tendencies informed by his Latin heritage as well as deep study of the history of modern art. Smith was born near the Texas/Mexico border to a Mexican mother and American father. He has been labeled a neo-surrealist, a neo-expressionist, or even a magical realist, but Smith’s work is hard to place. Employing folk tales, popular imagery, and satirical historical criticism, his paintings are not reducible to any one allegory. Mexico, and its particular blend of politics and Eros, however, is the root of Smith’s practice.

The monumental Guernimex, 1990, is an invasion of human faces and rat heads. The comingling of humans with animals is basic to Smith’s interests. As he has said, his animal images are “entities of the human figure. They are beasts, but they are directly related to a blueprint of our own existence. They become like cousins—the reflection of us with them is completely direct.” Smith appropriated Pablo Picasso’s famous Guernica, 1937, about the struggles of the Spanish Civil War of 1936 to 1939, and gave it over to a Mexican context, paying homage to both Picasso and the Mexican muralists, linking the two Hispanic traditions.

By Ray Smith in the Collection 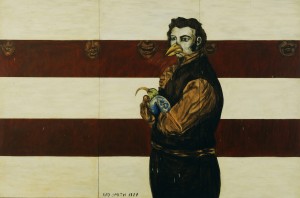