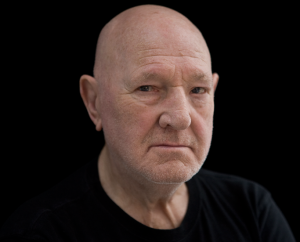 Malcolm Morley is known for his continual pictorial innovations throughout the course of his fifty-year painting career. Born in Britain, Morley moved to the United States in 1958 where he encountered the height of abstract expressionism and the rise of color field painting. Working through these styles, Morley developed a method for linking theories of abstraction with a realistic pictorial subject in super-realism, a movement that he is credited with founding. In the late 1970s, Morley, partially through his interaction with psychoanalysis, turned to making highly personal paintings constructed from watercolor collages. These works are regarded as the direct forebears to 1980s neo-expressionism.

Often Morely takes a postcard, brochure, or poster as his starting image, painting everything in the picture including captions and white negative space. For these super-realist works, Morley divides the image into smaller sections and then places the individual sections in an expansive grid across the canvas. Using a magnifying glass, Morley patiently reconstructs the image, piece by piece, on the large canvas. Vermeer: Portrait of the Artist in His Studio, 1968, is an example of Morley’s super-realism, employing his method to build up an image of a museum poster of a Johannes Vermeer painting. Morley’s appropriation of the Vermeer image directly precedes and cannily predates the rise of appropriation of 1970s conceptual art.

Age of Catastrophe, 1976, reuses one of Morley’s earlier paintings from 1966, SS Amsterdam in front of Rotterdam. Whereas the original painting, an appropriation of a postcard, showed a cruise ship in a tranquil port, Morley’s reprise of the scene depicts an airplane crashing into the picture, disrupting the earlier super-realistic work. As if responding to the crash, Morley’s surface becomes thick with accumulations of paint, and the image is seemingly knocked out of its perfection. On either side of the central image are “zips,” which Morley acknowledges as a reference to the sublime, open spaces of Barnett Newman’s work, saying, “I feel that Barney Newman emptied space and I’m filling it up again.”

By Malcolm Morley in the Collection 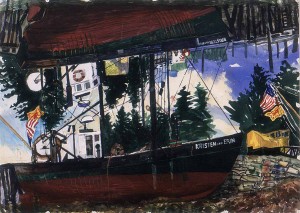 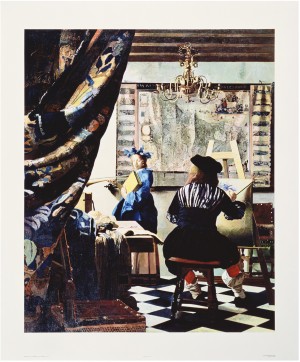 Malcolm Morley, 1968
Vermeer, Portrait of the Artist in his Studio 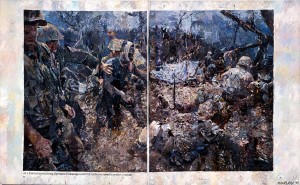 Malcolm Morley, 1971
At a First Aid Center in Vietnam 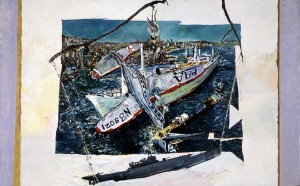