Louise Lawler photographs artwork wherever it is arranged, sorted, and installed—whether in auction houses, museums, private homes, storage units, or other venues. Lawler’s purpose is to capture how people make meaning in their lives with artwork and how artwork gains meaning through interaction with those lives. Instead of viewing art in the traditional sense, namely as an autonomous container of meaning set by the artist, Lawler sees the work as a collection of meanings that shift according to how it is written about, displayed, and regarded over time.

Lawler’s photographs are typically interpreted through the lens of institutional critique. The theory holds that social situations and institutions determine an artwork’s message, and since such frameworks establish meaning through various forms of competing ideologies, those ideologies can be evaluated. A Lawler photograph usually focuses on the most powerful organizations in the contemporary art world, the museum and the art market, and, in a sense, critiques those entities from the inside by both hanging on their walls and relying on them for interpretation and meaning.

Egg and Gun, 2008, and Nipple, 2008, depict the 2008 installation of works from The Broad collection at the Los Angeles County Museum of Art (LACMA). By entering the collection, the photographs take on several chains of interpretation. The photos are not about individual works in the collection but about how collections are formed and presented to the world. For instance, the LACMA installation is reflected in the shiny surfaces of Jeff Koons’s Cracked Egg (Red), 1994–2006, and both literally and metaphorically reflected in Lawler’s photograph.

By Louise Lawler in the Collection 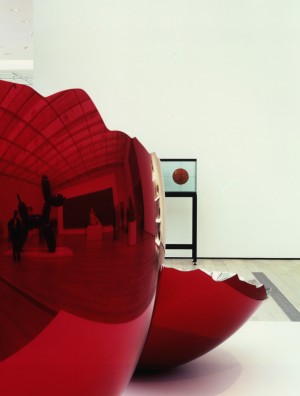 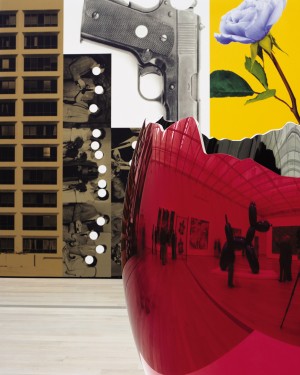