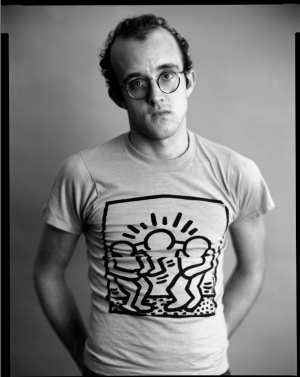 When Keith Haring arrived in New York in 1978, he found an active scene of young musicians and artists, including Kenny Scharf and Jean-Michel Basquiat, with whom Haring became fast friends. Perhaps more importantly, he found art moving out of galleries and into public life. New York at that time was a place of new trends like the rise of hip-hop, diverse club scenes, and graffiti art. Haring embodied the city’s energy, tirelessly taking his art wherever he was, whether to a gallery, his apartment, playgrounds, or department stores. In many ways, Haring’s use of popular imagery came from pop art’s ambitions to bring popular culture into a critique of fine art. His approach to pop, however, was expansive and performative, akin to the conceptual strategies of the late 1970s in its aggressive use of art as liberating social activism. After Haring contracted the AIDS virus in 1988, he focused his outpouring of activism on the AIDS crisis. Less than two years later, Haring died of an AIDS-related illness.

Haring developed his trademark style working on the black surfaces used to cover up old advertising logos in the New York subway. Later, Haring painted on materials from hardware stores such as tarpaulin or muslin. Derived as much from figures in recent art history, like Pierre Alechinsky and Jean Dubuffet, as from cartooning, his drawings and paintings were often created in minutes. Haring would then move onto the next drawing, sometimes completing up to forty in a single day. These drawings were seen by thousands each day and the momentum of Haring’s practice soon found him working in any medium that provided a proper context for his images or could hold a mark. Haring became a recognizable figure in New York, attaining somewhat of a celebrity status that drew much attention to his gallery shows, public projects, and merchandising.

Red Room, 1988, is monumental in size, transmitting Haring’s public, muralist sensibility to canvas. The painting demonstrates the artist’s iconic linear shapes, pulsing movement, and hierarchical arrangement. It also references Henri Matisse’s famous 1908 painting Red Room. Like Matisse’s work, Haring’s style and design pervade the life of his figures and the environments they inhabit, and Red Room displays this in a dramatic way. The painting shows a woman at leisure, leaning back and relaxing. The scene, however, is not relaxed or calm, but instead seething with Haring’s personal energy and enthusiasm.

By Keith Haring in the Collection 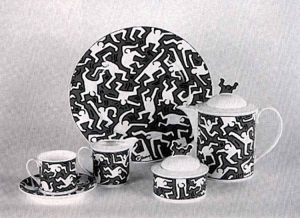 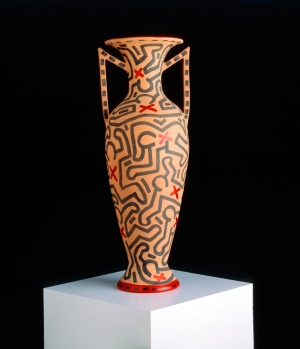 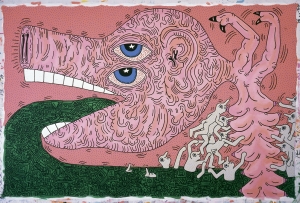 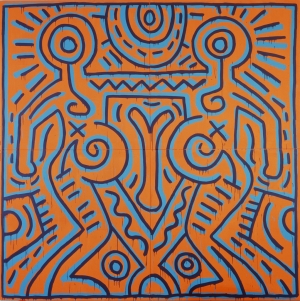 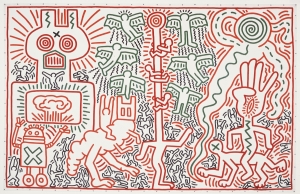 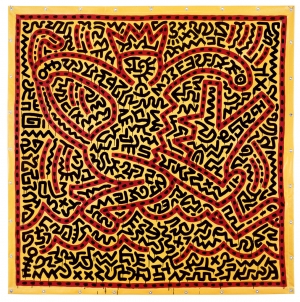 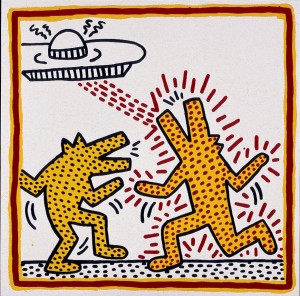 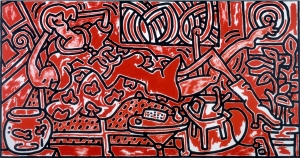