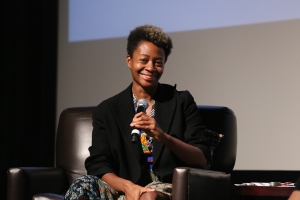 “I started this work with the silhouettes with the express project to make a Black woman’s art. The Black woman and me, the Negress and myself. Sort of one and the same and completely separate. It’s born partly out of just the experience of my body as it’s moved through the world, and the bodies it’s come in contact with. The kind of residual racism, residual psychosis, residual misogyny of the world.” —Kara Walker

Kara Walker was born in Stockton, California, in 1969, and moved to Stone Mountain, Georgia, at the age of thirteen. She experienced pervasive, yet often covert, racism and sexism in Georgia, where, in Walker’s words, “a longing for a romanticized and homogenous ‘past’ lingers and retains all of its former power.” She attended Atlanta College of Art and completed her graduate studies at the Rhode Island School of Design.

Walker’s work mines American legacies of domination based on race, gender, and sexuality. Best known for her art that employs the nineteenth-century technique of silhouetting, once commonly used for portraits and decorative craft, Walker portrays twisted landscapes of subjugation, depravity, and desire.

In 1997, Walker received a MacArthur Foundation Fellowship “genius grant.” That same year, her work became the subject of debate when African American artist Betye Saar argued that Walker’s work was “revolting and negative” and made “for the amusement and the investment of the white art establishment.” Walker’s art elicits shame and shock; nothing is off limits, from rape and bestiality to castration and cannibalism. While the work has faced criticism for its overt depictions of suffering, it is through these fictional representations that Walker confronts the real-life horrors inflicted on bodies and psyches, past and present. “I have always responded,” Walker said, “to art which jarred the senses and made one aware physically and emotionally of the shifting terrain on which we rest our beliefs.”

Walker summons archetypes, both clichéd and freshly shocking, to study how real and imagined chronicles of past trauma affect later generations. Writer Zadie Smith notes, “Caricature and stereotype are not Walker’s flaws—they are her sharpest tools.” Walker provokes us, with a graphic punch, to face the most disturbing, uncomfortable subjects, asking us to be critical of both society at large and our personal complicity in the cruel and unjust attitudes that shape daily experience in America.

By Kara Walker in the Collection 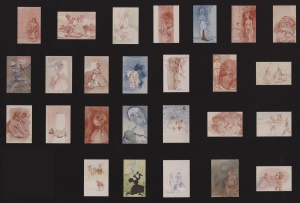 Kara Walker, 1996
From set 5 of the series Negress Notes 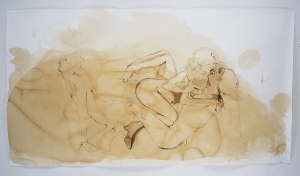 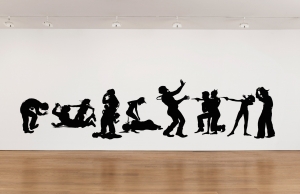 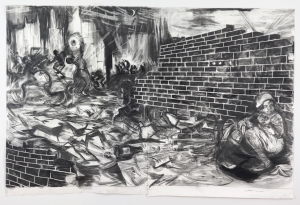 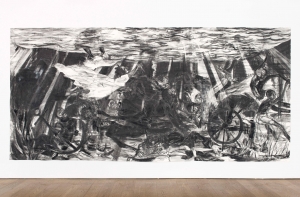 Kara Walker, 2012
The Palmetto Libretto (part two of a multi part work. This one's a sketch for an American comic opera with shipwreck and cargo)
On View 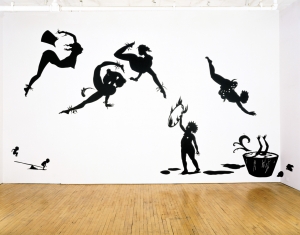 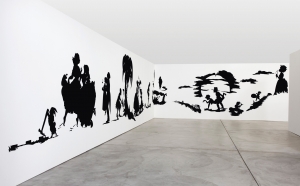 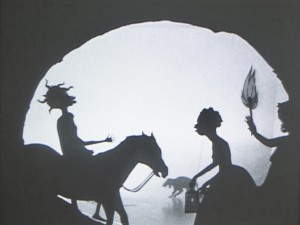