Jordan Wolfson works in video, film, installation, performance, print, and photography.  His work collages pop culture references, often using documentary, advertising, and music video as recognizable forms that are known and expected to deliver messages or stories. Wolfson describes his collage technique as taking and using the “byproduct(s) of culture”—byproducts such as memes that are transmitted with such frequency they become part of the collective consciousness.

However, Wolfson frames his work in formal terms, asserting that there is only an association between the objects and images because of their direct relation to each other within the artwork. Rather than offering judgments about society or didactic meaning, Wolfson is content as passive viewer or witness, letting his images accumulate without much direction to aid interpretation. Simply put, Wolfson’s artwork presents cultural messaging systems that become short circuited and torn apart by contradiction (bumper stickers that make little sense, robots who speaks only in riddles, characters seemingly possessed by a number of competing voices). His works are uncanny and strange, seeming to possess a desire to speak and be understood while Wolfson insures that their capacity to be comprehended is limited.

His film, Animation, masks, 2011, contains a sole character, an animated cliché Shylockian Jew whose nose and ears grow and morph as he alternates between reading Vogue magazine and pointing his fingers like a gun, aiming at his own head and the viewer. The character has no single voice, instead miming many voices. Early in the film, he lip-syncs a couple’s intimate conversation, mouthing both parts of the dialogue, which plays toward the male’s ego: “Will you tell them what it’s like to be with me?” he asks, and later, “Will you tell them how I am?” She whispers, “You’re a very playful lover,” which he commands her to repeat several times. Shots of interiors are projected in the background. Toward the end, clipart images mask his face.

In Animation, masks, Wolfson takes a cultural stereotype to an extreme, making the work irritating if not inflammatory. Distinct subject matter such as the difficulty of human relationships, the media portrayal of ethnic groups, and the challenge of self-expression are all forced together, begging to be interpreted. Though Wolfson gives us no guidance in what the piece may be about other than as a set of formal conditions, from a certain point of view, Animation, masks is a study in solipsism.

(Female figure), 2014, is equally memorable. Built in collaboration with Spectral Motion, an animatronic company based in Los Angeles, the installation consists of a robot equipped with facial recognition software. Facing a mirrored wall in a small room, the robot dances and speaks throughout a soundtrack composed of pop songs, some altered and some in their original state. The automaton’s female form is idealized and precise save her round joints, like a life-size moving Barbie doll. Clad in a blonde wig, a tiny dress, knee-high boots, and gloves, she indeed appears as a caricature of the hyper-sexualized female pop star, yet, importantly, she is covered in black smudges and wears a witch mask as she dances.

In simulating the caricature of the female celebrity, the epitome of the contemporary objectified human form, the work critiques the filmic trope of the gaze, the voyeuristic act of looking, and the resulting objectification of the viewed. Particularly, the work evokes the notion of the male gaze in which asymmetrical gender-based power results in all cinematic viewers—male or female. The installation permits entrance to only four people at a time, which enables the robot’s software to affix its “eyes” to the faces of the viewers. This reverses the gaze: while traditionally the subject observes the object, in this case the object looks at the subject, rendering the subject as object and vice versa. Additionally, the robot mouths Wolfson’s own voice, declaring in a whisper, “My mother is dead. My father is dead. I’m gay. I’d like to be a poet. This is my house.” The result is a truly bizarre experience, where the viewer is almost certain to endure desire, revulsion, anxiety, and perhaps even fear.

By Jordan Wolfson in the Collection 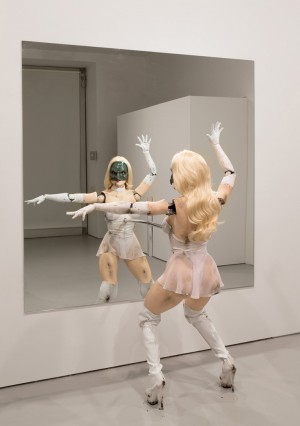