Associated with the light and space movement and minimalism, John McCracken is known for his planks, glossed to brilliant shine, that lean against the gallery walls. Though the works have an industrial quality, McCracken makes the objects by hand and arranges them intuitively, avoiding the preprogrammed systems and impersonal fabrications of many minimalist practitioners. He attempts to heighten the experience of abstract objects, translating feelings from his life into form.

In many ways, McCracken’s minimalism has a West Coast sensibility, with the fetishistic finish of artists like Larry Bell and Craig Kauffman, who garnered techniques from car culture to bring a new range of surfaces into contemporary art. McCracken’s dense enamels, in his words, use “color as material.” Color permeates through the entire object, becoming the object rather than just existing as a decorative or superficial element. This complete object also follows the minimalist impulse to avoid the sculptural pedestal, standing alone without displacement from the traditional museum display.

Flare, 2008, involves groupings of his planks in various sizes and colors according to the experience that McCracken would like to convey to the viewer. Flare is perhaps the most stark of the plank works, eight feet in height and plangent in its primary colors. McCracken’s works often become an imposing force in a gallery, drawing attention to their surfaces and presence.

By John McCracken in the Collection 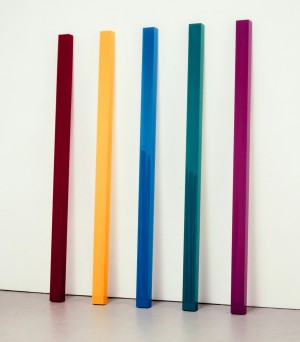