Part of the infamous 1997 Sensation exhibition at the Royal Academy of Arts in London, Jenny Saville creates enormous canvases that focus on bodies in an unflinching manner. Likening the physicality of paint to the feeling and appearance of skin, Saville constructs sometimes horrifying images of contemporary identity. Collecting material from pathology textbooks, plastic surgery manuals, chronicles of injuries and burns, and similar publications, Saville often adds an observational perspective to her work by attending surgery demonstrations and visiting butcheries. As shown in Stare, 2004–5,these sources are the starting points for Saville’s aggressive use of scale, brushy, wide strokes, and textures that extend long figurative traditions in painting and inventively adapt the medium for meditations on victimization, trauma, and disease.

Saville draws much from the history of painting, especially artists known for pushing the human figure to its limits of stress and decomposition. She cites Diego Velázquez’s tonal virtuosity, the carcass paintings of Chaim Soutine and Rembrandt, and Willem de Kooning’s notion that “Flesh was the reason oil paint was invented” as key influences. Critics also add a roster of British painters, including Francis Bacon, Frank Auerbach, and Lucian Freud, as important forerunners and inspirations for Saville’s work. What seems to separate Saville from her influences, however, is her reliance on conceptual, critical social messages instead of subjective expression. By Jenny Saville in the Collection 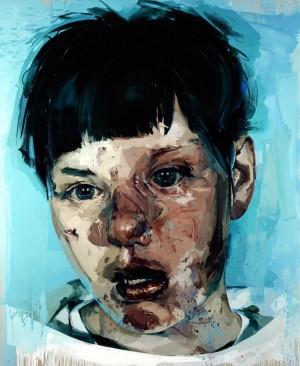 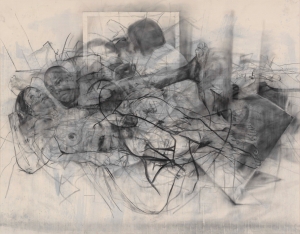 Jenny Saville, 2014
In the realm of the Mothers II
On View 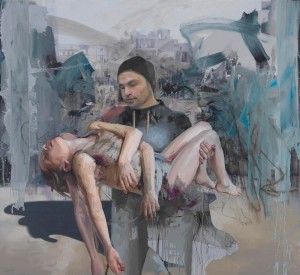