Polish-born, London-based artist Goshka Macuga mines archival material, assembling seemingly disparate images in order to create new narratives. In her recent work A Meeting of the St. Petersburg Union for the Liberation of the Working Class, 2013, Macuga collages images of women culled from the archives of Czech artist Miroslav Tichý with an image of Lenin meeting with union members. Tichý, who worked from the 1960s to 1985, took voyeuristic photographs of women (often without their consent) with his homemade cameras. By combining Tichý’s images with images of communist political events, Macuga turns the photographs on their heads, moving the women from passive objects of Tichý’s photographic gaze to active—albeit fictional—political participants of a history that often excluded them.

Macuga’s firsthand experience in postwar Poland uniquely positions her to examine communism, which she does by evading and complicating hierarchies of communist histories. Exemplar of this mode of inquiry is Death of Marxism, Women of All Lands Unite, 2013, a large tapestry depicting Marx’s grave photo collaged with images of women, some clothed and some undressed. The work drapes partially on the floor: the images of the grave and the women appear on the wall, while the portion on the floor shows grass and blankets strewn with open books by Marx and clothing, presumably belonging to the undressed women. The tapestry is to be sat on, as if one was visiting Marx’s grave and enjoying a picnic.

By partaking in the scene, one is implicated in the tapestry’s affirmation of the “death of Marxism,” both the death of an individual and an ideology. It is unclear if this affirmation invokes mourning or celebration in the depicted women. Their actions are disparate: one woman cleans the grave while another appears to be briskly walking by, and one covers her head with a scarf while in the foreground another undresses. In its title, the work takes the famous communist rallying cry engraved on Marx’s tombstone, “workers of all lands unite” and replaces the word “workers” with “women.” In this exchange, Macuga moves the slogan from a communist call to action to end class struggle to a feminist one to end the sexist oppression of women.

Tapestry is a significant form for Macuga, whose expansive practice also includes installation and collage. Tied up in a rich history of European power, tapestries were displayed in palaces and castles, adorning walls with chronicles of triumphant families during the Renaissance. Macuga resurrects tapestry as a way to tell European myths while removing representation from the control of the wealthy. Macuga’s use of the medium questions the lack of value assigned to it in contemporary art. Revising histories through tapestry, Macuga positions the tradition against itself, ridiculing the dominant voices previously represented while simultaneously exposing the medium’s devaluation in current art historical narratives.

There is also humor in these works, as in Lenin addresses the troops outside the Bolshoi Theater in Moscow, 2013, in which a woman appears to be climbing onto the podium with the leader while she is completely soaked in a bathing suit. Next to the woman, Lenin looks as if he were at the pool about to jump off of the high dive, a suggestion of leisure that borders on the ridiculous at this historically important moment. Macuga’s Suit for Tichý, 2013, is a series of bodysuits with caricature drawings of women’s sexualized bodies, meant to be worn by those who lounge on the aforementioned tapestry Death of Marxism, Women of All Lands Unite. By repurposing Tichý’s drawings as bodysuits Macuga shows their absurdity. Once placed on human bodies, the drawings’ distortions and exaggerations become embarrassingly obvious displays of Tichý’s desires, juvenile pornographic doodles come to life.

By Goshka Macuga in the Collection 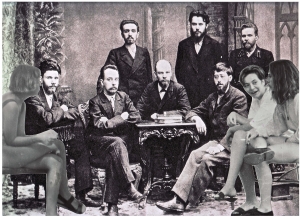 Goshka Macuga, 2013
A meeting of the St. Petersburg Union for the Liberation of the Working Class 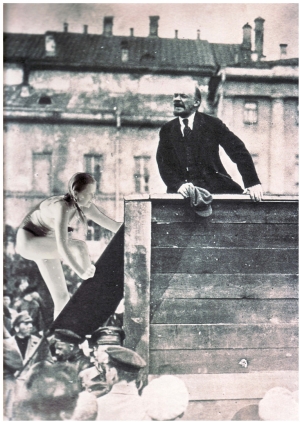 Goshka Macuga, 2013
Lenin addresses the troops outside the Bolshoi Theater in Moscow 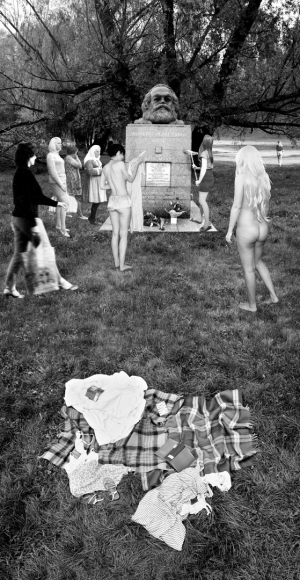 Goshka Macuga, 2013
Death of Marxism, Women of All Lands Unite
Browse the collection