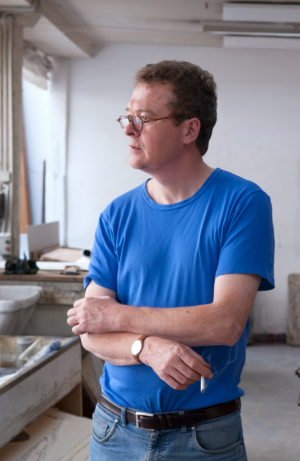 Günther Förg uses the language of abstraction employed by American artists such as Barnett Newman and Frank Stella as well as German artists such as Blinky Palermo and Imi Knoebel, but uses it in a contradictory, often surprising fashion that is mindful of the failings of modernist theories of painting. Curator Paul Schimmel once said of Förg’s art that it brings “sense of nothing but the thing itself,” meaning that the work empties abstract painting of its spiritual, timeless, and mystical qualities in favor of a style more in tune with minimalism’s concrete, material nature. Materials are very important to Förg, and his paintings and sculptures are often exercises in purely formal concerns. For example, he will use bronze, a material for permanent, epic sculpture, and fill its surface with fingerprints, chance circumstances, and material accidents that contradict its historically received nature.

Untitled, 1990, consists of twenty-two paintings made on wood panels sheathed with lead. Many of the works use the “zips” that Newman made famous in his abstract paintings of the 1950s. While Newman spoke of the sublime and transcendent nature of his abstractions, Förg presents a material-heavy surface that gives the works a literal weight and a concrete presence. Förg’s works are not symbols or phenomenological environments. Instead, they are rooted, material objects made by a human hand and without a program of abstraction other than the personal exploration of Förg himself.

Untitled, Series H, 1988, has a similar program. Here, however, Mark Rothko’s painting is a more likely association. Rothko manipulated and experimented with figure/ground relationships in his work and developed new techniques of staining paint into an ungessoed canvas to give his surfaces an ethereal, worldly sensation. Förg uses spackle, a heavier but similar material to gesso, to convert Rothko’s mystical planes into objective surfaces. Recalling Robert Ryman’s paintings, the materials on the four canvases set up a series of optical comparisons based entirely on an objective, nonillusory world to anchor perception.

By Günther Förg in the Collection 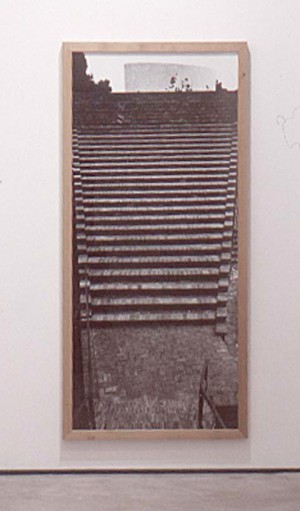