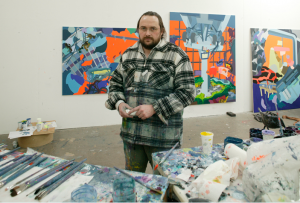 Featured in exhibitions such as the Museum of Modern Art’s Drawing Now and the Carnegie International, Berlin-based artist Franz Ackermann has established himself as one of the premier painters working today. From his first series of works, Mental Maps, made during his stay in Hong Kong in the 1990s, Ackermann has presented the confusing disarray brought on by urban sprawl, pervasive travel, and a life consumed by constant stimulation and technology. Recalling various pop cultural references such as psychedelic painting and advertising, Ackermann’s dramatic imagery suggests a world on the brink, teetering between fanciful flux and complete chaos.

Home, home again, 2006, is Ackermann’s most ambitious and focused work to date. Named for a popular Pink Floyd song, the immersive installation embodies the instability of urban living and the increasing anxiety at the center of global experience. Tourist brochures, gas cans, pipe fittings, and other objects accompany paintings and photographs. Bold and bright, the paintings juxtapose recognizable imagery such as airplanes with a cacophonous blend of overwhelming color and mathematical diagrams. Between the paintings, eighty-eight photographs of resort hotels, taken in a deliberate and straightforward fashion, demonstrate tourism’s dark underbelly, its potential to eliminate cultural nuance in favor of suffocating banality. Grand in scale, the ultimate vision is dystopian and foreboding.

By Franz Ackermann in the Collection 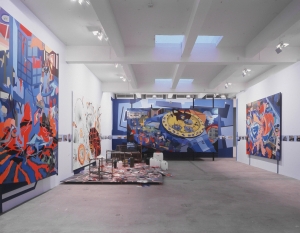