Elliot Hundley’s dynamic sculptures, collages, and paintings employ cut photographs, natural objects, urban detritus, paint, stick pins, and countless other materials, giving them an ephemeral, ad hoc effect in a gallery space. Often Hundley’s work features dramatic narrative arcs found in classic epic poetry and plays, contrasting the fragility of the materials with a loose plot line that the viewer can follow. Hundley’s work has a large art historical pedigree, ranging from the early combine sculptures of Robert Rauschenberg to the provisional minimalism of Richard Tuttle to the elaborate narrative impulses of many contemporary artists.

Blinded, 2009, enacts themes from Euripides’s Hecuba, a play that depicts the widowed queen of Troy marooned during the occupation of the Greeks. Blinded uses these photographs, mostly nudes, to develop groupings of people checkered like armies on the landscape. Washes of blues and greens undercut the groupings as well as larger elements, breaking up the surface and adding to the overall visual impact of the work. As curator Gary Garrels describes, “In Hundley’s assemblages, time—ancient and contemporary—spills forward and backward, one condition fusing into the other. A state of grace, before the fall, remains an echo, a still palpable presence, against the cacophony of history.” In many ways, Blinded and other Hundley works have the appearance of amateur stage sets, known for their abilities to change and morph using cheap found materials and the innovation of stage handlers.

By Elliott Hundley in the Collection 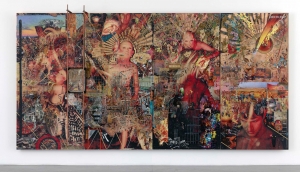 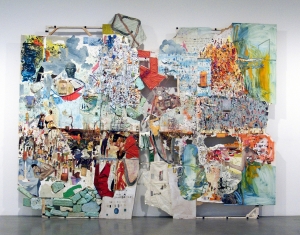