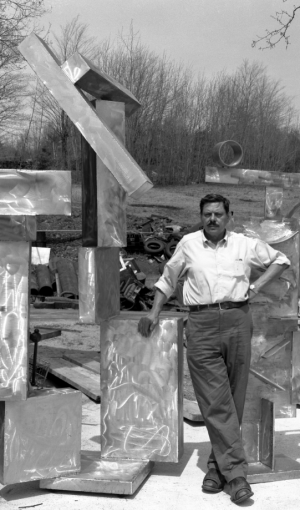 “Sculpture is as free as the mind, as complex as life.” —David Smith

Sculptor David Smith is known for his fierce independence and his pervasive influence over modern and contemporary art. Similar to the abstract expressionists, Smith internalized cubist painting composition and the psychosocial implications of surrealism, taking on the humanist pursuits of art focused on primordial themes of life, death, and nature. In his early work, influenced by Pablo Picasso and Julio González, Smith investigated divisions of three-dimensional space and eventually innovated a style of sculptural composition not incumbent on the singular integrity of the human form.

Early in his career in the mid-1930s, Smith was drawn to totem poles and ancient cultural objects, works less motivated by an understanding of the human body as much as by a mythological translation of human life and spirit into material. The notion of a human as a mixture of influences and sources, as one might find on a totem pole, was a vehicle for Smith to radical sculptural ideas. Over many decades, Smith pursued new ways of presenting sculpture in a modern context, and in his chosen medium of steel, he used many of the forms of his time, specifically the train and the automobile, as inspirations for work.

Cubi XXVIII, 1965, was the last of the famous Cubi series to be completed by Smith before his tragic death in a 1965 car accident. In many ways, Cubi XXVIII is a testament to the complexity of Smith’s meditations on historical sculptural form. It also displays his willingness to innovate and to avoid lapsing into routine or contentment in his work. The final Cubi sculptures are informally known as the Gate pieces and are distinguished by their open frame and shifting and often asymmetrical components. Cubi XXVIII is a hybrid of multiple design strategies, motioning toward architecture while also recalling many of Smith’s earlier innovations. From one angle, the work has a horizontal, processional trajectory, as did many works in Smith’s famous Voltri series completed in Italy in 1962. At the same time, the work’s vertical pivoting front plane dynamically undermines the sculpture’s overall architectural impulse.

By David Smith in the Collection 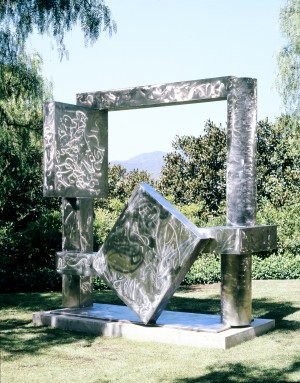